You Think You Know Me?

I'm a mid-thirties, married gamer, living on Long Island. Having recently moved from Virginia I am currently only employed part-time so I have a lot of free time on my hands. So I started this blog. Sit back, enjoy a glass of box wine, and witness the musings of what happens to a gamer when he decides to put the sticks down every once in a while.

After a day of goodbyes, packing, and hanging out with friends and family, the wife and I finally got on the road. A little after six in the evening we were on our way out of Virginia Beach. First Stop – Fredericksburg, VA.

The advantage that both my wife and I have is that all of our immediate families live very close to each other. This makes it easy to visit. Also, most of our friends are pretty close, but a few have left the area we grew up in. One of these friends lives out in Fredericksburg with his wife and son. We had a good visit with them. They made steak and potatoes for dinner and we played a round of Munchkin.

We left Fredericksburg a little after midnight and planned on stopping in Chicago to visit a college friend. We drove through the night and it was pretty uneventful. At one point we were directed off the Pennsylvania Turnpike because it was closed for construction. The detour lead us through the backwoods of the Allegheny Mountains. A dark, two lane highway with switchbacks and hills. It would have been a nice drive during the day. At night my wife could only hum the opening melody to dueling banjos.

Sunrise came and with it, a landscape of flatness and boring. Nothing for as far as the eye can see. The only things to break the monotony were the occasional gas station/Starbucks/Burger King/generic restaurant rest stops. Having driven cross country several times, this was not a surprise to me, my wife, however, was curious and wondered how people could live out in the middle of nowhere. I think her exact words were, “I’d do meth too if I lived out here.”

For the most part traffic was great. Not a lot of construction and no congestion. Chicago, however, was a different story. According to the GPS there were about thirteen miles left on our route to the hotel. Those thirteen miles were full of vehicles and bumper-to-bumper traffic, driving not much faster than fifteen to twenty miles per hour. At this point my wife and I had been up for more than twenty four hours and we were tired and snapping at each other. That kind of tired where you feel it in your eyes and the more you keep them open, the more they burn.

Sears Tower, or, if you’re being correct, Willis Tower

We did make it to the hotel with only minor verbal incidents. The Best Western in Morton Grove, IL. It is a nice, clean, hotel that allowed pets for a small ten dollar fee and a fifty dollar refundable deposit. Since we had the dog with us we were concerned about finding hotel rooms. Many that we looked at in the area added an extra $50 – $100 to the room rate, and that was per night. We were happy when we found this Best Western that only charged the ten with the refundable deposit. The best part about the room, though, was its bed.

Jess and I took showers (Our only complaint about the room: the shower had no water pressure. It was like the shower was peeing on us) had a bite to eat, and went right to bed. Got up four hours later, ate some more, and went back to bed. It was glorious. 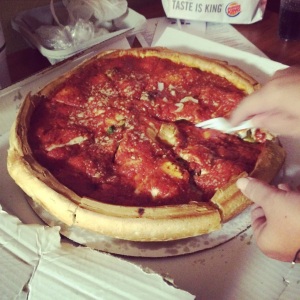